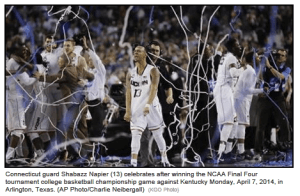 How March Madness Cut Down the Net(work)!

Congratulations to the UCONN Huskies, the NCAA March Madness champs! It's always exciting when the underdog prevails. When the odds are stacked against you, as an IT pro, that is, you need to be prepared to manage through a bunch of problems that can make life difficult.

I've got two areas to cover in today's post. First, we're going to crown the Ipswitch March Madness champs, then I'm going to share some details regarding a survey we conducted to see how March Madness affected networks around the U.S. (If you are wondering what this is about, check here for the full Ipswitch Madness.)

For the past several weeks we’ve been making arguments as to why 16 network issues should or should not be crowned as the biggest problem facing the network manager in 2014. Frankly, there’s not much left to say or argue for with our two finalists, BYOD vs. Traffic Spikes. They both create their own issues and struggles for IT and in the end, it may just be a matter of preference, or disdain, on which problem is viewed as the worst. Our panel of experts has debated, we’ve found common ground and it’s gotten heated at times, but in the end, we have selected a champion.

Frankly, there’s not much left to say or argue for with our two finalists, BYOD vs. Traffic Spikes. They both create their own issues and struggles for IT and in the end, it may just be a matter of preference, or disdain, on which problem is viewed as the worst. Our panel of experts has debated, we’ve found common ground and it’s gotten heated at times, but in the end, we have selected a champion. 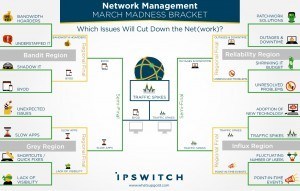 It’s hard to look past BYOD. It represents a loss of control as the majority of personal devices aren't under the watchful eye of the network administrator. Not to mention the exponential impact wearable technology will have upon managing networks in the years to come. Traffic Spikes, on the other hand, can cause a traffic jam (not unlike the one I just encountered coming to work in a downpour). If a bunch of employees are streaming highlights from the NCAA’s own March Madness tournament and your network is bogged down for too long due to an increase in traffic and you are unable to recover, it’s game over.

In a truly tough decision, it was determined that both of these issues suck (a lot of bandwidth from the network). Whether or not you'll consider it an upset or not, the confetti is raining down upon Traffic Spikes as they get the final hats and t-shirts of the 2014 Network Management Bracket.

Thanks for playing along with us over the past several weeks; we’ve enjoyed the debate and bringing our thoughts to you. And really, who doesn’t enjoy a good bracket? Agree, disagree with our eventual champion? We’d love to hear from you!

This morning we announced the results of a survey taken by more than 100 IT professionals around the U.S. It seems that IT pros are not fans of worker who streamed March Madness games, or anything else that isn't related to their jobs. Here are the results:

Planning Ahead for the Madness

When asked what types of devices workers use to stream video to watch events like March Madness, company-provided computers (83 percent) ranked the highest, followed closely by smartphones (77 percent). Tablets (55 percent) and personally-owned laptops (46 percent) rounded out the rest of the pack. The findings indicate that the BYOD movement plays strongly into network performance problems caused by popular events.

Brackets are as unpopular as the event itself

More than 62 percent of all IT professionals polled did not have a bracket through an NCAA March Madness pool, nearly 21 percent had one but had been eliminated, and the remaining 17 percent were off to the Sweet Sixteen. Ipswitch created its own March Madness bracket [link] with a network management spin to explore problems that make IT pros jump through hoops. More about our journey from the sour sixteen to the top issue that cut down the net(work) can be found here: https://bit.ly/1sj9hkW.

Those responsible for keeping networks running smoothly may not be as enamored with March Madness as others – and for good reason. Spikes in wireless bandwidth usage can lower productivity and the moods of those trying to do their jobs. There’s no need for IT pros to go into overtime as they can manage their networks during popular events, like March Madness, by gaining visibility as to those who are using more than their share of bandwidth and isolate issues before they spin out of control.

If you want to learn more about how March Madness applies to your daily work life, join us TOMORROW, April 9 for our webinar entitled “Network Management’s Sweet 16 – Solve the Problems Competing for your Time“.