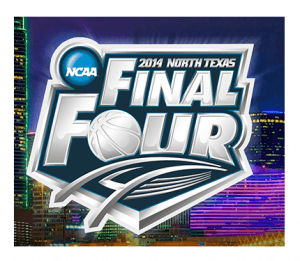 The goal of every NCAA March Madness team is to reach the Final Four. The experts say this validates the season and makes it a success. Yet, is it enough to just get there? Or does true satisfaction only come when the confetti drops and you are the last team standing? We’ve had a heck of a tournament thus far and it's a shame only one team will win, but that’s just the way the bracket goes. (If you are wondering what this is about, check here for the full Ipswitch Madness.)

In our first March Madness Final Four matchup BYOD is facing off against Slow Apps. In the past several weeks a strong case has been made for both of these issues to stake their claim as the champion. So it really comes down to the head-to-head matchup. It’s hard to believe anything can be more frustrating than a slow app. A slowdown always seems to come at the worst possible time. Workers on tight deadlines sit there and stare. Not what you are looking for as a way to boost productivity. BYOD, on the other hand, creates nightmare scenarios for IT as it opens up countless numbers of potential slowdowns and vulnerabilities for the network. Every employee these days seems to bring at least two or three mobile devices to work. So who’s it going to be? As frustrating as a slow network or app can be, perhaps the only thing worse is wondering which one of the 6,487 devices on the network is causing it to be slow in the first place. BYOD is on to the Finals! 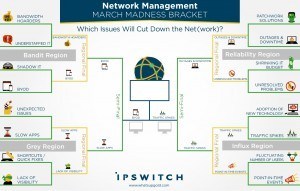 In our second Final Four matchup, Traffic Spikes are taking on Outages and Downtime. Talk about your limited options, any IT or network manager will tell you that they despise both of these issues with equal enthusiasm, but as we said, only one can win out. Outages and Downtime pump the breaks on the business about as fast as any IT related issue. The only potential saving grace is that they problem is often affiliated with the service provider and not the network, and in instances when it is, the problem can normally be rectified quickly. Traffic Spikes on the other hand can creep up quickly and wreak havoc on the organization and frustrate the would-be customer. They tend to be quick hit issues that the network manager is often blind to until it’s too late. So who wins this battle of the heavy weights?

In a bit of an upset, Traffic Spikes is gearing up for a Monday night showdown with BYOD in the Finals!

In regards to the "other" March Madness streaming towards its final showdown, I'll be watching the Huskies take on the Wildcats tonight!

If you want to learn more about how March Madness applies to your daily work life, join us THIS WEDNESDAY, April 9 for our webinar entitled “Network Management’s Sweet 16 – Solve the Problems Competing for your Time“.