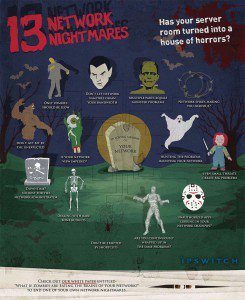 The Horrors That Haunt Network Managers

Halloween may last one day, but network managers have to face IT nightmares that haunt them all year long. Nightmares like those caused by users exercising poor judgment. In some ways, they're not much different from the folks you see in horror films who always make the worst decision possible. Case in point is Geico's Halloween-themed commercial running on American TV this month. The piece depicts four friends running through fields, at night. They come upon a creepy farm house, and decide to hide behind... chainsaws.

The horror movie drama encapsulates the actions of the typical network user too. At the moment of choice users often make the decision that creates a nightmare scenario for network managers and admins, it’s what they do. Imagine the daily scenarios that play out across organizations every day, including clicking on false advertising links and inadvertently downloading malware or sending private documents like medical records through unauthorized applications like Dropbox.

Network nightmares have become the expectation for IT departments as they battle the demons, ghosts and goblins that traverse the organizations infrastructure on a daily basis. They have come to accept the types of problems that keep them awake at night while anticipating the unspeakable network terrors that will likely face them at work the next day. When the sun comes up at the end of a horror movie it signifies that the night of terror is over and the threat has been eliminated. In the business world it’s just another day for resource limited IT departments to battle network demons.

Last year we introduced the 13 most common hauntings  of every server room, sadly these ghosts are as menacing as ever and have likely grown stronger over the past year with introductions of new technology into the workplace such as wearables and the heightened focus on the network due to the Internet of Things. In honor of the Halloween holiday this year, we have given our list a fresh look and perspective at what can turn your server room into your own house of horrors.

What if Zombies are Eating the Brains of Your Network?

A network zombie can be any problem on your network, servers or applications that you thought was dead but then suddenly springs back to life. (aka intermittent performance problems). These creatures appear randomly and without warning, representing the most troublesome of foes. In our latest whitepaper, we explain how an advanced Application Performance Monitoring (APM) solution helps you kill those network zombies once and for all.