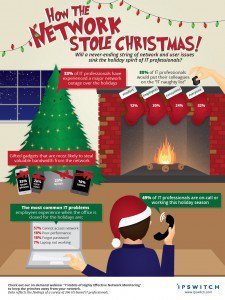 How the Network Stole Christmas

Yesterday we announced the results of our second annual “Happy Holidays?” survey where more than 200 IT pros shared compelling data on the impact that network issues have on their ability to enjoy the holidays. To the surprise of no one, IT pros are bearing the brunt of the burden in keeping organizations operational during the holiday season.

Some of the key findings from the survey revealed that:

Check out our on-demand webinar “7 Habits of Highly Effective Network Monitoring” to learn how to simplify root cause identification, and create an up-to-date, complete picture of your company’s wired and wireless networks, servers, and applications --- and keep the grinches away from your network.