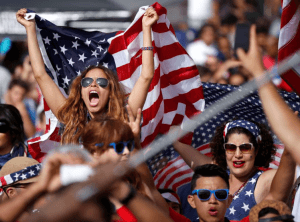 Blame it on Rio: Application Performance

From the start, it was clear that high viewership numbers would present challenges for IT departments. FIFA reported record numbers of viewers the world over had tuned in during the earlier group stages of the World Cup, with a notable increase in viewers in the United States compared with previous years. According to Forbes, ESPN reported that total average viewership throughout the World Cup was at 56.57 million, with each match involving Team USA garnering an average viewership of 14.14 million. In fact, the USA-Portugal match was the most watched football match ever on US TV – 24.7 million viewers via ESPN and UNIVISION combined – higher than any past NBA Finals game and better than the average viewership of games during the 2013 World Series.

Such high levels of interest from the start suggested that employees would surely be streaming the matches during work hours. This would consume a lot of wireless network bandwidth and stress company networks, including application performance. A report by Cisco found that video streaming and IP broadcast of the World Cup was expected to generate 4.3 exabytes of Internet traffic – nearly three times Brazil’s average monthly traffic. WatchESPN got so many concurrent viewers – a record 1.7 million – that the digital edition of the game sputtered and died for several people.

In anticipation of these concerns, Ipswitch conducted a survey of more than 200 IT administrators which sought to measure the impact of the World Cup on corporate networks and application performance. The results, which confirmed our expectations, indicated the following:

In some cases, companies chose to handle the problem by playing hardball themselves. For instance, The Wall Street Journal reported that the Federal Reserve Bank of New York banned ESPN from being streamed on employee desktops and laptops because the streaming was causing bandwidth problems at the bank. This proved to be only a temporary fix: employees simply shifted their viewing to Univision.

World Cup viewership continued to break records globally and according to published reports, estimates were that more than one billion viewers would tune into Sunday’s finale. The saving grace for IT being that this was taking place on a non-work day for most organizations.

While the World Cup 2014 is over, it has taught us some valuable lessons along the way. Planning for large scale media events is now a part of the IT puzzle and the ability to anticipate bandwidth spikes that can harm core business functions need to be accounted for. Before the next World Cup we’ll see two more Olympic Games, a new United States President and several other global sporting events. It will be interesting to see if these lessons are applied or if we are doomed to keep repeating our mistakes.

We'd like to help provide guidance on how to manage wireless bandwidth and network traffic flow to optimize application performance. In particular, this Weds, July 16, we will host a webinar that covers: