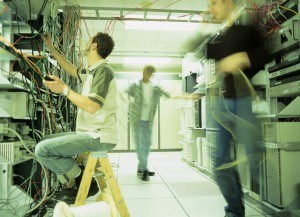 WUG Ninja: Why Should You Care About Device Roles?

My name is Jason Alberino and I am a senior engineer in our professional services group and a first-time blogger here on the Network Monitor. I interact with a good number of Ipswitch WhatsUp Gold customers every month and you may see me here from time to time offering advice to those of you using our network monitoring products.

Today I'm going to cover why you should care about device roles. Device roles are what WhatsUp Gold uses to determine which monitors to add to which device. So why should you care? Simply put, properly configured device roles reduce administration overhead. In addition, you can create your own custom device roles that allow you to create a profile for any type of device you could imagine. The limitation is that most of the role identifiers are based on SNMP values, so devices without SNMP capabilities can be a challenge to identify with consistency.

[For reference, this post originally appeared on my WUG.ninja blog where I have several others that will help you do things with WhatsUp Gold you may not have known were possible.]

Existing devices in WhatsUp Gold are checked against these device roles during scheduled discoveries. This makes the addition of new monitors very easy for the WhatsUp Gold administrator.

There are a few scenarios that can take place from here:

Scenario 2
At least one device is now responding to additional monitors that are within the discovery role. Or, new devices not yet added to WhatsUp Gold were found. The discovery results will be placed into the saved results tab. If you configured your scheduled discovery to email, an email is sent.

If scenario 2 occurs, WhatsUp Gold will not make any changes found on its own. In order to apply the changes found and/or add the new devices, you must bring up your saved scheduled recovery results. These results will show whether a device is new, existing, or identical.

To apply the changes on the device you want it is easiest to click ‘Add all devices to WUG’. This will not immediately add the devices. Instead you are prompted with another window with the list of devices and a textbox with a group name. From here you can sort the devices by type, which allows you to easily select all existing or new devices. Note that you can change the group name to that of an existing group and the devices will be added to that group. However, if all of the existing devices are already in that group, then they will simply be updated with the changes. There can never be 2 copies of the same device in the same group, unless you’ve inadvertently added the device to WUG more than once.

By having scheduled discoveries setup with device roles properly configured you never need to worry whether or not you’re monitoring everything you need to be. It also drastically reduces administration overhead.