The OSI model standardizes the key functions of a network using networking protocols. This allows different devices types from different vendors to communicate with each other over a network.

The Datalink (2), Network (3), and Application (7) layers are the most common used for monitoring.  Network monitoring systems use these layers to discover the devices on the network and how they are connected, to generate network topology maps, and to monitor the network.

Switches connect computers, printers, servers and other devices to the private network. A switch works as a controller enabling devices on the network to communicate with each other. Switches are Layer 2 devices

Firewalls protect networks. A firewall controls incoming and outgoing traffic based on rules. This creates a secure barrier between a trusted private network and an untrusted network, like the Internet.

Networks deliver applications and information to users. Applications and information live on servers. A server is a running instance, or copy of an application. Servers take requests from users and respond accordingly. For example, when you access a website, a web-server “serves” up webpages to your local device. Other examples of servers are email servers, and database servers.

How Data Passes Through a Network

Most private networks are connected to the internet. For example, the internet connects remote users to central offices. It connects customers to websites.

Diagram of data passing through a network (click to enlarge)

Firewalls also control user access between the internet and the private network. For instance, a firewall can be configured to prevent users on the private network from using specific protocols such as peer to peer. This is one way that Firewalls secure private networks from unauthorized access, malware and other security threats.

Data packets passed through the firewall are received by a switch on the private network. Switches connect laptops, servers, printers and other devices to the private network. These devices are connected to the switch using a Network Interface Card, or NIC for short. Each NIC has a unique Media Access Control, or MAC address. Switches transmit data between devices using these MAC addresses.

Why Monitor a Network?

So why is it important to monitor networks? The network is the life line of the IT infrastructure.  When networks fail, the flow of information required by applications and business operations stop.

Networks are dynamic environments.  Network Admins are continually asked to add new users, technologies and applications to their networks.  These changes can impact their ability to deliver consistent, predictable network performance.

When network problems arise, Network Admins are pressured to identify the root cause before it impacts users, applications and the business.  This is more problematic with intermittent performance problems which are hard to replicate and diagnose.

Many IT organizations are subject to Service Level Agreements, or SLAs.

So what are SLAs and how do they impact IT? An SLA is a contract between IT and Line of Business Owners. Meeting SLA commitments are often included in IT compensation plans. SLAs are a performance guarantee.   They are measured and reported on.

Why are SLAs important?  Because poor performance and down time is costly.  For an eCommerce website like LL Ben, one hour of downtime can cost millions in lost revenues.

SLA requirements can be very strict.  For example, A four nines SLA requires 99.99% uptime.  This allows for less than one hour of downtime per year.

The more demanding the SLA, the more costly it is to implement and maintain.  For example, Delivering four or five nines requires network admins to configure their network switches in redundant pairs, AND have a third switch readily available to swap in case of failure.

NMSs differ in the capabilities they delivery for each of these functions.

Discover: Find the Devices on Your Network

Network monitoring begins with the discovery process. Simply put, if you don’t know what’s on the network and how its all connected, you can’t monitor it. NMSs discover the devices on the network – The routers, switches, firewalls, servers, printers and more.

NMSs include a library of monitoring templates, which defines how to monitor a device. In WhatsUp Gold, we call these templates Device Roles.

When a network monitoring system completes the discovery process, it automatically assigns an appropriate device role to each discovered device. 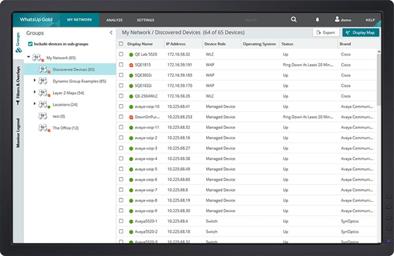 An NMS with Layer 2/3 discovery will discover the port-to-port connectivity between devices on the network. For effective network monitoring – it’s not enough to know what’s on a network, you need to know how its all connected.

Why? Because a performance problem on one device can impact the performance of another. For example, when a switch fails, all devices connected to that switch can’t communicate over the network. This is a big problem if this is the switch connecting the servers supporting an organization CRM system.

A network admins eyes are their most valuable diagnostic tool.  Their ability to visualize their networks can saves hours, and even days troubleshooting network problems.

Unfortunately, network wiring closets get complex and messy. This limits the network admin ability to visualize the network and impedes problem resolution.

Many NMSs require a significant amount of manual processing to create a network map.  Some merely provide a drawing tool and rely on the Network Admin’s knowledge to map out the network.

Monitor: Keep an Eye on Your Network 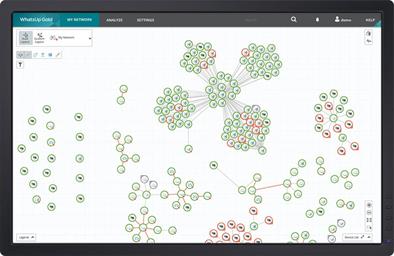 As we stated, Network Monitoring Systems provide turn-key device roles that define what to monitor. Network admins can modify device roles or create new ones from scratch. NMSs expose network admins to a large selection of monitors.

As a starting point, network admins want to monitor the “big 5” for any device on the network.  This includes Ping availability and latency, and CPU, memory, disk and interface utilization.

Most network monitoring tools provide monitors for other hardware components like the fans and power supplies in a switch, and even monitor the temperature in a wiring closet. They can also monitor network services like HTTP, TCP/IP and FTP

Alert: Get Notified When Devices Go Down 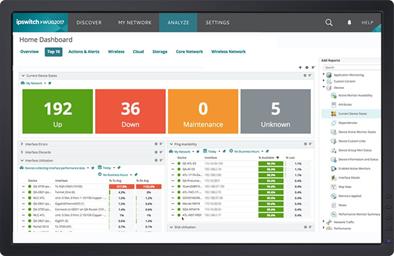 Threshold based alerting enables network admins to respond to problems before they impact users, applications or the business. For example, the NMS is configured to issue an alert when the CPU utilization on a router exceeds 80%.  This allows the network admin to proactively investigate and respond before the router fails altogether.

Performance metrics like CPU, memory and interface utilization fluctuate during the day. They may exceed thresholds for a few seconds or minutes during periods of peak usage. Network Admins don’t want to be bothered with these minor blips. To avoid this, NMS alerts are configured with a time elements.  For instance, if CPU utilization exceeds 80% for more than 10 minutes, then issue an alert. 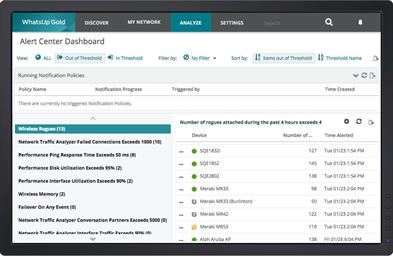 Believe it or not, Network Admins need to eat, sleep and spend time with their families. Some NMSs let Network Admins configure blackout periods, when alerts are suspended.  For example, to save energy costs, printers to shut down at night. NMSs can be configured to suspend alerts from printers during the evening hours

Report: Deliver on SLAs with Real-time and Historical Reporting

Network admins are engaged in a continuous life cycle of designing, analyzing and redesigning the network. 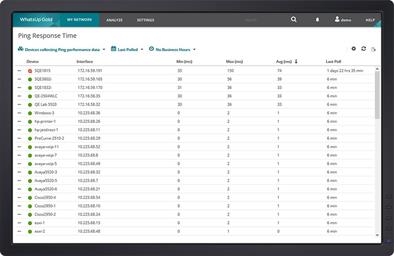 NMSs deliver monitoring information in webpages called dashboards. Dashboards are made up of turn-key views.  For example, a top 10 CPU utilization view or a Top 10 Memory utilization view.

Network Admins scan summary dashboards to assess the health of the entire network. And then drill down with detailed dashboards of specific devices and monitors to quickly isolate performance problems

Most NMSs are customizable. Network admins can create dashboards for their internal clients – Their managers, line of business owners, Help Desk, and counterparts managing systems and applications

How Does a Network Monitoring Tool Monitor the Network?

The two most widely used monitoring protocols are SNMP and WMI. They provide Network Admins with thousands of monitors to assess the health of their networks and the devices on them.

SNMP works by querying “Objects”. An object is something that an NMS collects information about. For instance, CPU utilization is an SNMP object. Querying on the CPU utilization object would return a value that an NMS uses for alerting and reporting.

The Objects queried by SNMP are maintained in a Management Information Base, or MIB. A MIB defines all the information that is exposed by the managed device. For example, the MIB for a Cisco router will contain all objects, defined by Cisco, that can be used to monitor that router such as CPU utilization, memory utilization and interface status.

The objects in a MIB are catalogued using an standardized numerating system. Each object has its own, unique Object Identifier, or OID.

Some NMSs provides a MIB Browser. A MIB Browser allows Network Admins navigate thru a MIB to find additional objects that they want to monitor on a device

WMI is the Microsoft implementation of Web-Based Enterprise Management, a software industry initiative to develop a standard for accessing management information in the enterprise.

This protocol creates an operating system interface that receives information from devices running a WMI agent. WMI gathers details about the operating system, hardware or software data, the status and properties of remote or local systems, configuration and security information, and process and services information. It then passes all of these details along to the network management software, which monitors network health, performance, and availability.

Although WMI is a proprietary protocol for Windows-based systems and applications, it can work with SNMP and other protocols. However, Microsoft has deprecated WMI commands in Windows in favor of CIM cmdlets, so if you're using PowerShell to manage WMI you should be using those instead.